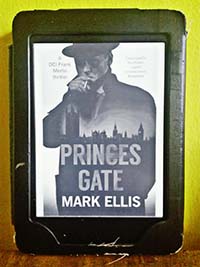 When a brilliant emigré scientist is killed by a hit-and-run driver and the body of a female employee of the American Embassy is washed up in the Thames, DCI Frank Merlin and his team investigate.

Merlin's investigations soon ruffle feathers at the Foreign Office as the American ambassador, Joseph Kennedy, is a well-known supporter of appeasement, and many powerful and influential Britons favour the pursuit of a negotiated peace settlement with Hitler.

The death of another embassy employee leads Merlin into some of the seedier quarters of wartime London. His investigations are hampered by interfering superiors fearful of their impact on Anglo-American relations. This at a time when, to many, America represents Britain's only hope of salvation.

Capturing the atmosphere of Britain in January 1940, Princes Gate is an enthralling detective novel.

This was an intriguing, harsh and cruel world. This is the world of DCI Frank Merlin.

He is a member of the Crime Writers Association.

As I have said in another [Goodreads] review by a book by the same author, if you’re not one for steady paced or a slower paced story, this will most likely not be a book for you. Though if you don’t mind the slower pace, enjoy suspense, crime as well as a story set in WW2, definitely try reading this book. The first thing I’ll say is that I wasn’t the hugest fan of Arthur Norton, nor of Freddie Douglas – I got the impression that they thought they were more important and better than everyone else. I enjoyed the dynamics between Frank Merlin and his co-workers, though I got the idea that even though at times Assistant Commissioner Gatehouse could be hard on his employees, there were times when he did have a soft spot for them nonetheless. I ended up giving this book a four star rating and got a copy in exchange for an honest review.

It was nice reading another book by this author; and enjoyed diving into the world of Chief Inspector Frank Merlin again.