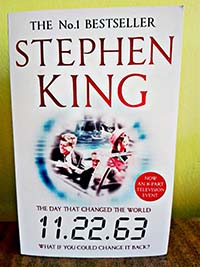 WHAT IF you could go back in time and change the course of history? WHAT IF the watershed moment you could change was the JFK assassination? 11.22.63, the date that Kennedy was shot - unless . . .

King takes his protagonist Jake Epping, a high school English teacher from Lisbon Falls, Maine, 2011, on a fascinating journey back to 1958 - from a world of mobile phones and iPods to a new world of Elvis and JFK, of Plymouth Fury cars and Lindy Hopping, of a troubled loner named Lee Harvey Oswald and a beautiful high school librarian named Sadie Dunhill, who becomes the love of Jake's life - a life that transgresses all the normal rules of time.

With extraordinary imaginative power, King weaves the social, political and popular culture of his baby-boom American generation into a devastating exercise in escalating suspense.

Stephen King is the author of more than fifty books, all of them worldwide bestsellers. His recent work includes The Bill Hodges Trilogy, Revival, and Doctor Sleep. His novel 11/22/63 was named a top ten book of 2011 by The New York Times Book Review and won the Los Angeles Times Book Prize for Mystery/Thriller as well as the Best Hardcover Book Award from the International Thriller Writers Association. He is the recipient of the 2003 National Book Foundation Medal for Distinguished Contribution to American Letters. He lives in Bangor, Maine, with his wife, novelist Tabitha King.

I found the time travel world in this novel absolutely fascinating, and the vivid descriptions that were given were pretty cool. And even though Jake Epping isn’t the sort of character I’d hang out with, he seemed to be a respectable character nonetheless. I ended up giving this leisurely book a four star rating.

A story like this makes a person question a lot of things, especially about those in power, and the influence they can sometimes hold. If you’ve read this book, be sure to let me know on social media what you thought of it.