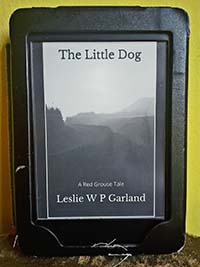 Two foresters find a little dog sitting beside the forest haul-road way out in a remote part of the forest. What is the little dog doing there? As the narrator, a young Bill, tries to ascertain who is his unsavory workmate, the little dog disappears. Then suddenly events take an unexpected turn and our young naive Bill starts to learn some awful truths.

Adult speculative literary fiction for those who like to think about what they are reading.

(Warning to sensitive readers; this tales does contain a tiny bit of bad language and references to sex)

Leslie Garland was born in 1949, qualified as a Chartered Civil Engineer and worked for several years on projects in the UK, the Far East and Africa. During this period he won the Institution of Civil Engineers "Miller Prize" for a paper on tunneling. Changing times resulted in a change in direction and after qualifying as an Associate Member of both the British Institute of Professional Photography and the Royal Photographic Society he started his own stock photograph library and wrote for the trade press. An unexpected break in his Internet connection fortuitously presented the time to make a start on a long cherished project of a series of short stories, and the first two of "The Red Grouse Tales" were drafted. Two more tales have followed and he is now working on a second batch of tales. He lives with his wife in Northumberland, England.

Those that enjoy literary books where the characters do a lot of internal ponderings, try this book. It is one that hasn’t got the plot in the forefront, as well as not too much being revealed about any of the characters. I got the impression that the narrator was quite a scenic watcher.

This is only the second book that I’ve read by this particular author, and even though this wasn’t the favourite between the two I’ve read, I’ll most certainly be reading more in the future.