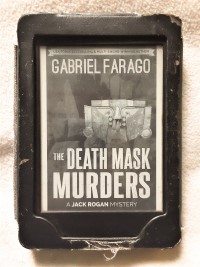 When convicted killer Maurice Landru reaches out from a Paris prison and asks for help to prove his innocence, celebrated author Jack Rogan cannot resist. Drawn into a web of hidden clues pointing to an ancient mystery, Jack decides to investigate.

Joining forces with Francesca Bartolli, a glamorous criminal profiler, Mademoiselle Darrieux, an eccentric Paris socialite, and Claude Dupree, a retired French police officer, Jack enters a dangerous world of depraved cyber-gambling where the stakes are high, and the players will stop at nothing to satisfy their dark desires.

Following his ‘breadcrumbs of destiny’, Jack soon comes up against an evil genius who terminates his enemies without mercy and is prepared to risk all to win.

On a perilous journey littered with violence and death, Jack uncovers dark secrets of a murky past of ruthless conquistadors, bloodthirsty pirates and shipwrecked priests, all pointing to a fabulous Inca treasure, waiting to be discovered.

Can Jack expose the mastermind behind the horrific murders and retrieve the legendary burial mask before it falls into the wrong hands, or will the forces of darkness overwhelm him and destroy everything he believes in?

Gabriel Farago is the USA TODAY Bestselling and Multi-Award-Winning Australian Author of the Jack Rogan Mysteries Series for the thinking reader.

As a lawyer with a passion for history and archaeology, Gabriel had to wait for many years before being able to pursue another passion—writing—in earnest. However, his love of books and storytelling started long before that.

Born in Budapest, Gabriel grew up in post-War Europe, and after fleeing Hungary with his parents during the Revolution in 56, he went to school in Austria before arriving in Australia as a teenager. This allowed him to become multi-lingual and feel ‘at home’ in different countries and diverse cultures. Shaped by a long legal career and experiences spanning several decades and continents, his is a mature voice that speaks in many tongues.

‘I try to weave fact and fiction into a seamless storyline,’ he explains. ‘By blurring the boundaries between the two, the reader is never quite sure where one ends, and the other begins. This is of course quite deliberate as it creates the illusion of authenticity and reality in a work that is pure fiction. A successful work of fiction is a balancing act: reality must rub shoulders with imagination in a way that is both entertaining and plausible.’

‘The beauty and solitude of this unique environment,’ he points out, ‘gives me inspiration and the energy to weave my thoughts and ideas into stories which, I sincerely hope, will in turn entertain and inspire my readers.’

If you like historical thrillers, excitement, mystery and suspense, if you enjoy exotic settings, colourful characters and fast-paced action, if you like to learn about interesting, well-researched subjects that tease your intellect and imagination, then once your step inside, Gabriel will show you his world; the world of the storyteller.

This book has three time lines, the present one, one set slightly back in the past – and then further back in the past that explains what is being investigated and why. This is again a character driven more, and has a slower pace – so don’t pick this one up if you’re after plot or after a story that has a faster pace.

It was nice to read a book again from this author.