Review - The Witches of Vegas by Mark Rosendorf 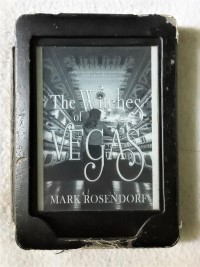 Where can Witches and their vampire mentor practice their powers without being discovered or persecuted?

By using their magic, the Witches of Vegas become the number one act performing on the Las Vegas Strip—a great achievement for them, but not so much for the magicians—who can't possibly keep pace. Isis Rivera is the adopted fifteen-year old daughter of The Witches of Vegas. Zack Galloway is the teenage nephew and assistant to the last magician left in the city. Although they should be rivals, when Valeria, a four-hundred-year-old witch with a long-seeded grudge against humanity arrives in Sin-City, both teens act to bring their families together to stop the evil hag in her tracks.

But can the combined witches' powers and the ingenuity of the magicians be enough to stop Valeria from taking over the city and possibly the world?

Mark Rosendorf's writing is based on the personalities and experiences he has come across throughout his life, coupled with his own wild "if only I could do that" imagination. He is the author of the young adult series, The Witches of Vegas. He is also credited with The Rasner Effect series, a suspense/thriller trilogy published between 2009 and 2012.

Born November, 25th, 1974, and raised in Queens, New York, Mark holds a Master's Degree from Long Island University's Human Development and Leadership program. He is a licensed Guidance Counselor for the New York City Department of Education's special education district. He began his counseling career in September, 2001. Prior to that, he worked in the hotel industry.

Mark has also moonlighted as a professional magician. Today, he teaches magic and Illusion to his students in order to teach teamwork while developing their confidence.

Having accomplished his goals of becoming an author, Mark decided on an early retirement from writing. Then, one night, at two a.m., a new and unique story shot into Mark's brain like a lightning bolt, screaming for him to write it. Mark found himself spending several nights taking notes on the characters and their stories. That is how The Witches of Vegas series was born.

The Witches of Vegas placed second in the young adult category of The International Digital Awards. It was also named one of Shelf Unbound's Notable Indy and received a five star rating from the prestigious InD'Tale Magazine.

This was a book that had a slightly different but interesting take on witches.

The story starts off with a bang, and the book felt like it had a bit of a Moulin Rouge theatre type feel to me. I ended up giving this book a four star rating and got a copy in exchange for an honest review.

I thought that this was quite an interesting book to read – and look forward to reading the next book in the series.