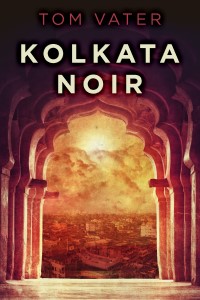 Genre: Crime, Contemporary with a small snippet of dystopian

Becker is a British traveler in trouble. Madhurima is a rising star police officer. In these three explosive tales, the two join forces to investigate the city’s crooked high society.

On the way, they take on deluded would-be messiahs in search of Mother Teresa’s stolen millions, encounter fanatics, circus freaks and cannibals, fall in and out of love and pay homage to one of the world’s most beautiful and toughest cities.

Amidst passion, murder and mayhem, is there room for two lovers driven by justice and compassion?

Tom Vater is a writer and editor working predominantly in Asia.

He has published four novels, The Devil's Road to Kathmandu, currently available in English and Spanish, and the Detective Maier trilogy which includes The Cambodian Book of the Dead (2012), its follow-up The Man with the Golden Mind (2013), and finally The Monsoon Ghost Image (2018).

His articles on Asian politics, tourism, the environment, minorities, pop and youth culture have been published in many publications including The Wall Street Journal, The Times, The Guardian, The Mekong Review, Marie Claire, and Geographical.

He is correspondent for Germany's largest independent travel publisher Reise-Know-How in Thailand as well as The Daily Telegraph's Thailand destination expert, and a frequent contributor to the Nikkei Asian Review.

He has published several non-fiction books, including the highly acclaimed and bestselling Sacred Skin (with his former wife, photographer Aroon Thaewchatturat), the more recent Burmese Light with photographer Hans Kemp and Cambodia: Journey through the Lad of the Khmer with photographer Kraig Lieb, the best-selling illustrated book in Cambodia in 2018/2019.

Tom is the co-author of several documentary screenplays, most notably The Most Secret Place on Earth, a feature on the CIA's covert war in 1960s Laos.

In his spare time, Tom travels and plays RocknRoll.

In the first part of the book, everyone who is a suspect has their own motivation and something to gain from the murder. You get an idea of who the murderer is, though it doesn’t quite get confirmed.

It was the first time I’ve read this author’s books – and since I enjoyed this one; I’ll be reading more of his works in the future.