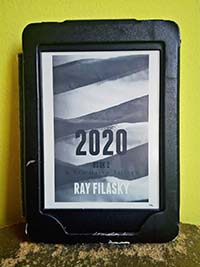 2020 is the second in a three book series, A New Haven Trilogy, and follows The Bliss of Ignorance. The story continues with the Haskins family enjoying the hard won easing of the restrictions placed upon them by the creation of New Haven. Although only a partial and temporary fix, one would think that life should be easier since the appointment of their son Dylan as Governor of the New Haven Territory. However, those secretly in charge considered him a pawn in their scheme – a pawn easily manipulated because of his youth and inexperience.

Tee and Emma Haskins are almost torn apart by the efforts of the real leaders; individuals who fabricate stories to discredit them as credible witnesses against two devious individuals. We are introduced to an unscrupulous young female attorney who defends Thornton and a Federal prosecutor who reluctantly becomes one of the Haskins’ greatest allies. We also get a closer look at the detainment camps referenced in the first book and the arrest of the improbable high-level officials in control.

Taking a detour into the world of fiction, he is excited to announce the release of a new novel, "The Bliss of Ignorance." This is the first book in the New Haven Trilogy and introduces us to Tee and Emma Haskins as they are forced to deal with the unexpected upheaval of nationalistic shortsightedness and societal tension. The next book is "2020" (Book 2) is due out in November 2017 and "An Act of Penance" (Book 3) will be available in March 2018.

Things appear to be settled at first – but unfortunately there are some people that don’t want to lose their positions; which ensures that other people start becoming dispensable. Dylan Haskins ends up being naïve enough to trust people he shouldn’t. As I mentioned in my review of ‘Bliss of Ignorance’ – there is the occasional word that was used in the wrong context, and then also a once-in-a-blue-moon punctuation error.

Since I’ve read the second book in the series – I’m definitely interested in finding out what the third book is going to encompass.