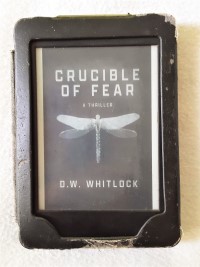 A man's life in chaos. His young daughter at risk. What is a pound of flesh worth?

Dante Ellis is a successful advertising executive on the rise. His world is plunged into a harrowing nightmare after he's targeted by ruthless hackers known only as Dark Messiah. Dante soon discovers no part of his life too sacred to be used against him, no secret buried too deep. What began as a veiled threat soon descends into a desperate conflict against the will of an unseen enemy.

D.W. Whitlock, author of Crucible of Fear, has been a storyteller for most of his life. Starting with short stories scribbled in crayon, animation flip-books, stop-motion and later CG animation for television and video games. While pursuing a career in animation, writing has always been the first step, from short descriptions to detailed backstories. As a life-long reader and book lover, crafting thriller novels felt like the natural evolution of those first forays into writing.

When not writing, D.W. enjoys gaming, spending time with his family and Triumph Motorcycles.

D.W. lives in California with his wife, son and French bulldog, Nikki.

There were places in this book where it had a very dark atmosphere – which can also lead to the occasional eerie feel of it. One thing that I felt was a bit unbelievable, was that there were a few characters that similar things happened to. This felt a little out the norm of where an author usually focuses on one character.

There were times where the story almost took on a bit of a surreal quality. Overall, this was a book I quite enjoyed. I ended up giving this book a four star rating and got a copy in exchange for an honest review.

This is an author to watch out for – and one whose books I’ll definitely be reading in the future.