Review - The Truth About Unspeakable Things by Emily A. Myers 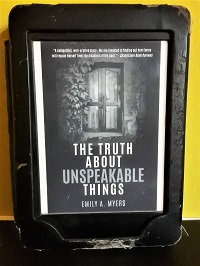 Emma Marshall is haunted by the trauma of her past. The night she ended her engagement to cheating fiancé, Beaux, was meant to be the night she took back control, but it was only the beginning of his true hold over her. Nine months after suffering an intimate assault by the man who pledged his life to her, Emma is doing – okay. At least, that’s what everyone thinks. No one knows the unspeakable truth of what happened between her and Beaux. It’s a secret Emma plans to carry to the grave, until Julian Cole moves in next door and opens Emma’s mind and heart to the possibility of love after betrayal. As the reporter and music executive grow closer in the music-filled city of New Orleans, Emma must risk everything to protect her newfound happiness. As Emma embarks on a dangerous journey to bring her ex to justice, the bounds of forgiveness are tested as more unspeakable truths come to light. Will Emma overcome her trauma and have her second chance at love? Or, will her past destroy her and everyone she holds dear?

Emily A. Myers is a fiction author based in Louisiana. Her debut novel, The Truth About Unspeakable Things, sets the tone for Emily's future works as it follows a young woman's journey through the dangerous pitfalls of adult relationships and the complexities of growing up.

I thought this book was put together nicely, how it led from one thing to another. Kat appeared to be a bit of a shallow character, even though she was well-meaning. The meeting with Julian seemed a bit too convenient a way of introducing the characters to each other – though I did enjoy getting to know Julian as a character. There were some redemptive characters in this novel – which I was personally glad about. I ended up giving this book a four star rating and got an ARC in exchange for an honest review.

I thought that this was a decent debut – and would consider reading another book by this author in the future.