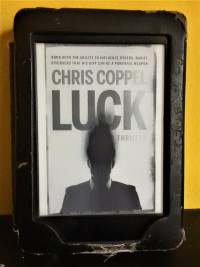 Luck is the story of Daniel – a man born with the gift of being able to influence others. He learns that he can both charm as well as destroy. As his ability grows, so does his craving for acceptance.

Once his ability is unleashed on the American political stage, Daniel finds that he no longer has to settle with charming the few. Now he can control the minds of the masses, as his own sanity descends into a tormented oblivion.

I was raised the son of a writer. My father wrote plays, films and novels. He was successful and suffered constant wanderlust. I was born in America when he was there writing Vertigo for Alfred Hitchcock.

I would like to think that it was my choice to write about things that go bump in the night, but it wasn't. I had no idea that I would one day write tales of horror, but that is now what I do. With each new book, I feel drawn further into the dark void that we feel but rarely see.

I hope you will join me.

One thing I enjoyed about this book was the use of satire. There was also some dark humour in it as well. I liked following the adoptive parents. Daniel doesn’t really make a full appearance until a bit later in the book.

I quite enjoyed the writing style of this novel, and would consider reading more books from this author.