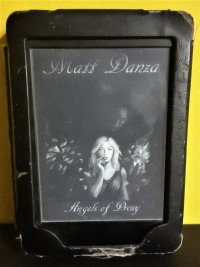 Trapped within Vesper’s Proxy, Lee Kager must navigate her way through a new foreign land. With the clock ticking against her, she must seek out the Angels of Proxy, hiding amongst the multiple guests. The future rests on her shoulders, with failure not at all an option. In order to be an angel, one must acquire their wings. Angels of Proxy, the fourth chapter to The Fin Series.

When Matthew Danza is not staring at a computer screen from his IT career, he is staring at a computer screen, writing the night away. His first book: The Fin, is the first book out of seven in the series. While growing up, Danza was always inspired by horror movies, books, and games. He draws inspiration from the film and novel, Jaws; which was his initial inspiration for the series, along with other culturally popular monsters. Whenever he is scuba diving he is always looking for sharks and trying not to get hit by the occasional boat! A relaxing night for him usually consists of playing a horror video game or reading a book that his editor recommends to him. When he is writing, he consistently pulls inspiration and new ideas from all of the things that he enjoys doing and reading. There are constantly notes being sprawled across any and every piece of material that can be written on! Danza is set to write a total of seven books total in the Fin series and a second series called Always Yell Fire in which four total books will be written. The fun won't stop there, however, and there will plenty more works to read in the future!

In this novel, there are two points of view: Lee Kager and Edmond Castilla – out of these points of view, I prefer Edmond’s; his seemed to be a bit more interesting.

Parts of this story felt a bit dragged out, but was decent overall. I ended up giving this book a four star rating and got a copy in exchange for an honest review.

It’s intriguing to read another book by this author – who improves in small increments with each book.