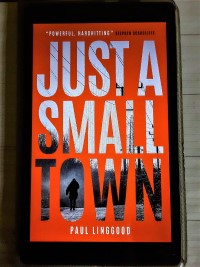 A small town that could be anywhere: industry in decline, streets in decay, many have left, while those left behind take short-term joy in drugs.

Paul Linggood dropped out of school at 16. He joined a gang, and drugs and violence became a large part of his life. His debut novel, Just a Small Town, reflects this life. His home town of Stevenage, is a town that could be anywhere - industry is in decline, streets are in decay and many take short-term joy in drugs. His novel highlights the neglect and despair within old industrial towns and the damaging influence of gangs in society. Paul writes about what he knows: friends who became gangsters, were incarcerated, became addicts, died from overdoses, were killed or killed themselves. He says, I believe I have some authority to write about aspects of the novel. When I was younger, I had many similarities to the characters in the early chapters, particularly Jim. I came from a family broken by divorce. I was involved with drugs and hung around the streets. My friend was stabbed by another of my friends when I was 17 and this had a massive impact on me. I went to a pretty bad place for a while but managed to come out the other side. Paul's life changed when he met a girl, went to night school, studied for a BA in English Literature and followed this with an MA in Creative Writing.

This book has quite a dark tone and atmosphere to it. As a person carries on reading, you slowly start connecting the characters.

This isn’t going to be a book for everyone – if you’re the sort to not like dark books where things don’t improve much for the characters; skip this one.