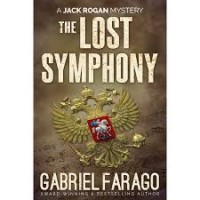 A murdered tsarina. A lost musical masterpiece. A stolen Russian icon. Can Jack honour a promise made a long time ago, and solve an age-old mystery?

When acclaimed Australian journalist and author Jack Rogan inherits an old music box with a curious letter hidden inside, he decides to investigate. As he delves deeper into a murky past of secrets and violence, he soon discovers that he’s not the only one interested in solving the puzzle.

Frieda Malenkova, a ruthless art dealer, and Victor Sokolov, a Russian billionaire with a dark past, will stop at nothing to achieve their deep desires and foil Jack’s valiant struggle to uncover the truth.

Joining forces with Mademoiselle Darrieux, a flamboyant Paris socialite, and Claude Dupree, a retired French police officer, Jack enters a dangerous world of unbridled ambition, murder and greed that threatens to destroy him.

On a perilous journey that takes him deep into Russia, Jack follows a tortuous path of discovery, disappointment and betrayal that brings him face to face with his destiny.

Will Jack unravel the hidden clues left behind by a desperate empress? Can he save the precious legacy of a genius before it’s too late, and return a holy icon revered by generations to where it belongs?

The Lost Symphony is the sixth standalone novel in the page-turning Jack Rogan Mysteries series.

Things start getting interesting at the halfway point in this book – the chapters bounce between the present and the past.

I gave this book a four star review and got an ARC in exchange for an honest review.

It was nice reading a book from this author again.