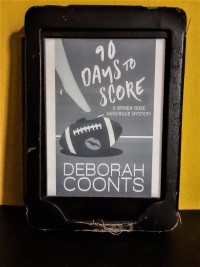 Now my wannabe ex is dead, and everybody thinks I did it.

Worse—I inherited everything…including the Roughriders, the NFL franchise the locals follow with a religious fervor bordering on a cult-like fanaticism.

Imagine, in Dallas, a woman, and worse, a Northerner, running their sainted team?

My name is Brinda Rose, and I’m a Jersey girl caught in the net of Southern pretense, privilege, and back-stabbing, with nary a rule book to guide me.

The whole city seems out for my blood.

But the NFL gave me 90 days to solve my pesky little legal issues and prove I am up to the task of running an NFL franchise. Big of them.

My pal, Lucky O’Toole sent reinforcements in the form of a long, tall, drink of Texas charm named Paxton Dane, although he’s as clueless as I am in the kind of voodoo needed to fend off the coffee-klatch of bored, bitter wives of the power brokers in town.

Intent on protecting their positions (even if it means defending the scum they married) they feast on newcomers with a piranha frenzy.

As if this wasn’t bad enough, I keep seeing flashes of a guy tailing me who looks a lot like my ex.

Could he be alive? The thought has me sleeping with a handgun and doubting my sanity.

I applauded Brinda Rose when she stood up to the team about their behaviour near the beginning. Everyone seemed to have their own agenda. There were some chapters where the cut-off point seemed a bit off. For those who enjoy fairly light suspense, mystery and crime, this is a book to pick up. I got an ARC in exchange for an honest review.

It was nice reading another one of Deborah’s books – I’ve come to quite enjoy them.