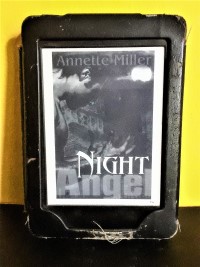 One bad relationship and too many super-villain battles send Karen Spraiker, AKA Sterling Dragon, to upstate New York for a murder mystery weekend. The last thing she expects is a real mystery and a man with magical eyes who causes her blood to race the moment they meet.

Randall Dupre has left his clan to aid the northeast werewolf pack in finding their kidnapped children. When he meets Karen, he knows she's the one destined for him. But will she feel the same after seeing what he becomes when the sun goes down?

Originally from Baltimore, MD, Annette Miller married an Air Force man a year out of high school, getting the chance to see Germany and most of the United States. Always a fan of science fiction, fantasy, and horror novels, she didn't discover romance until her oldest son was two. Then, she couldn't get enough. Her husband retired from the military and after reading so much paranormal and seeing all the hero movies, she decided romance and superheroes went together. That's when her Angel Haven series was born and the rest, as they say, is history.

I’m not usually one for an insta-love type relationship, but I could sort of let this one go. And though this book seemed primarily like a paranormal romance, the author knows how to up the stakes.

This ended up being a nice light read for me.