Review - Murder and the Muse by Alexei Bayer 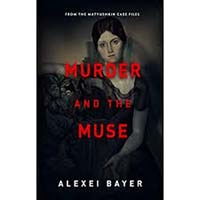 But when the case bleeds over into murder, machinations, and international intrigue, dredging up long-forgotten histories from the Civil War, not everyone is eager to see where the clues might lead.

Yet Matyushkin – as relentless and gut-driven as ever – won’t be stopped, even if it means taking on his partner, the KGB, and a ghost from decades past.

In this third installment in the Matyushkin Case Files, Bayer is in top form, painting a vivid picture not just of life in 1960s Moscow, but of connected events half a century before, when the Soviet regime was being twisted and shaped by war and revolution.

A page-turning mystery rich in historical detail and compelling characters.

Alexei Bayer is a New York-based author and translator. He writes in English and in Russian, his native tongue, and translates into both languages. His translations have appeared in Readings and Words Without Borders, as well as in such collections as The Wall in My Head, and Life Stories. His three mystery novels, Murder at the Dacha, The Latchkey Murders, and Murder and the Muse are published by Russian Life Books.

This book had more of a plot and culture drivenness to it – and is most likely why I enjoyed the book as much as I did. If you’re into a bit of historical fiction with a crime twist to it that’s set in Russia, try picking this book up. I ended up giving this book a four star rating and got a copy in exchange for an honest review.

This definitely isn’t going to be the last book that I read from this author – I was quite impressed with this book.