Review - Who Are You by Diana K. Robinson 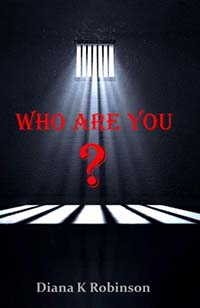 Born and raised on a remote farm in South Africa, Elisabeth Pieterse, a young, naive trainee nurse meets Dion Du Toit, a wickedly handsome salesman whose suave exterior hides a monster within that she discovers only after their wedding.

She knows instinctively that if she wants to stay alive it is safe to remain with him.

Finally, in a courageous but ill-advised attempt to quickly resolve her company's financial problems, caused by Dion, Elizabeth then fails to answer the one telephone call that would have changed the course of the life forever.

Diana K. Robinson is a country bumpkin at heart, born and raised on a farm in Rhodesia - now Zimbabwe, then lived in South Africa for the better part of her adult life. Since then, Diana is now happily living in England, where all her family are originally from.

Diana’s qualifications are in the Equine world and the only 'writing' she has ever undertaken is articles for various newspapers and magazines on her equestrian practices and even her own amazing horses. Furthermore, the topic of her next book plays into this very theme, a manual called the ‘Equus Soul Technique’. This technique developed over many years and grew organically when Diana ran workshops for CEO's mimicking the herd leadership skills and putting them into practice in business to enhance productivity and unity within the work force. Her four-day equine-facilitated therapy workshops for traumatised women opened the door to evolving the technique into healing traumatised horses and grew from there.

“One could say I was just about born on the back of a horse.”

Diana’s father, a farmer, owned racehorses and played polo for many years until his accident on the polo field that put him into a wheelchair for life.

*Please note that this is the only social media that I can find on the author.

This was quite an intriguing book – more than I thought it would be. One thing that I had been hoping to hear a little bit more of was how Elizabeth’s life was after she got back home, even though things would have see-sawed the way that they had for a lot of the book.

This was an enjoyable read, I ended up giving it a four star rating and got a copy in exchange for an honest review.

Since I was impressed with this book – I most certainly hope that this author carries on with her writing career; since it would be interesting to see what books she put out next.