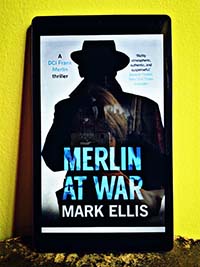 War rages across Europe. France is under the Nazi thumb. Britain has its back to the wall. In London, Scotland Yard detective Merlin investigates a series of disturbing events - a young girl killed in a botched abortion, a French emigre shot in a seedy Notting Hill flat, a mysterious letter written by a British officer, gunned down in Crete. With action spanning Buenos Aires, New York, Cairo and Occupied France, Merlin and his team are plunged into a dark world of espionage, murder, love and betrayal.

This was an intriguing, harsh and cruel world. This is the world of DCI Frank Merlin.

He is a member of the Crime Writers Association.

There’s two or three story-lines going on in this novel - at some point some of these end up meeting; these story-lines focus on historical fiction; crime as well as political situations in the WW2 era. Since I’m not the biggest political buff – there were times when I got a little bit lost in this section of the book, and there was also quite a bit of spying going on. Sometimes it was questionable what sides some characters were on. I ended up giving this book a four star rating and got a copy in exchange for an honest review.

Even though there were times where I got a little bit confused and lost in this book – it was still quite an enjoyable read, and things did become clearer as the book went on. I’ll definitely be reading another book from this author.