Review - Get Rich or Get Lucky by Max Nowaz 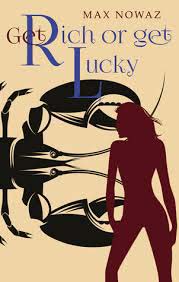 Genre: Contemporary with a splash of Paranormal

After a string of disappointments with his literary career, Adam decides to embark on a get-rich-quick scheme by renovating rundown houses. Then by chance, he discovers a book of magic in a hidden basement of the latest derelict property he has acquired for renovation. Adam can' believe his luck.

Excited to share his find, he invites his friends Dick and Charlie to tell them about it, but they are very skeptical about the abilities of the book and think Adam is delusional. When Adam tries to demonstrate the magic, things quickly take a turn for the worse. Adam inadvertently casts a spell which turns Dick into a crayfish. Unable to reverse the spell immediately and while searching for the solution, he leaves Dick in the garden pond. Adam and Charlie decide go to The Three Witches, Adam's local pub, for a drink to calm their nerves and take stock. While they are there, it rains very heavily and the pond gets flooded and the crayfish Dick disappears.

Dick's wife Rachael reports him missing to the police who suspect Adam is having an affair with her and has done away with Dick. Things continue to spiral out of control when Adam is burgled and the book is stolen. He then discovers that a powerful, evil warlock Bruce, is also looking for the book.

Adam finds himself in a race against time, to recover the book and thwart the evil warlock threatening him, to stand any chance of bringing Dick back, if he can. Meanwhile he also has to save himself from the attention of the police, and in particular a police officer, who is convinced of Adam's guilt. They come and dig up his newly laid concrete patio at the back of his house in search of Dick's body. Though unsuccessful, they are eager to pin Dick's murder on him.

Having published ‘Timbi’s Dream’, a children’s fantasy in rhyme in 2005, I sold my business in 2009 and embarked on writing career as a playwright and novelist. My first one act play ‘Cheating Death’ was very successfully produced on stage at the Place Theatre in Bedford in 2013. ‘The Arbitrator’ was published in July 2016. My next novel ‘Get Rich or Get Lucky’ was published in January 2017.

For me, things only started picking up halfway through the book. The concept was interesting; and I wished that the paranormal side of the story had been explored more – this could have been done in small bits in the first half of the book; which unfortunately didn’t happen.

I think if this author had to delve into the paranormal genre as a whole – it would be quite interesting to see what he comes up with.