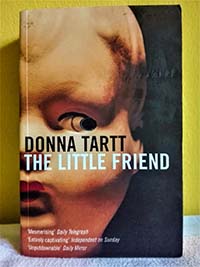 The setting is Alexandria, Mississippi, where one Mother’s Day a little boy named Robin Cleve Dufresnes was found hanging from a tree in his parents’ yard. Twelve years later Robin’s murder is still unsolved and his family remains devastated. So it is that Robin’s sister Harriet—unnervingly bright, insufferably determined, and unduly influenced by the fiction of Kipling and Robert Louis Stevenson--sets out to unmask his killer. Aided only by her worshipful friend Hely, Harriet crosses her town’s rigid lines of race and caste and burrows deep into her family’s history of loss.

Donna Tartt was born in Greenwood, Mississippi and is a graduate of Bennington College. She is the author of the novels The Secret History and The Little Friend, which have been translated into thirty languages.

*Please note that as far as I know this is a fan-moderated page; since there doesn’t appear to be any social media that the author has herself.

The things that I ended up liking about this book was its characters, the writing and the atmosphere. The setting was also done very well, even though sometimes the descriptions got a little bit much.

It also felt that some culture of the South was weaved in as well – one thing to note is that even though there are quite a few stereotypes in this book; they are done quite well.

This is the second book that I’ve read by this author; and though not a favourite like the other one of hers, I’ve still got one more book to read of hers, which I’m definitely looking forward to.