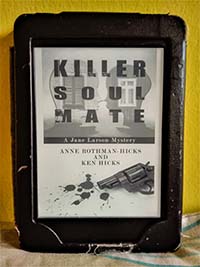 Jane Larson is back, and trouble abounds on New York’s Upper East Side!

A new client, Jasmine, hires Jane to undo the terms of a matrimonial agreement with her ex-husband, the owner of a prosperous hedge fund who does not like to lose. At the same time, Jane’s landlord is working to evict her from the storefront law office where her mother had practiced for many years, and Jane is forced to fight to save her mother’s legacy. However, it seems there is no way she can win.

All too soon, the bodies begin to pile up and Jane has to figure out who is responsible before she becomes one of the victims. Meanwhile, a guy named Gary is trying to worm his way into her life, and, even though she thinks he is much too young for he, she starts to fall for him. The problem is that he has a habit of showing up where the murders occur. Can she trust him?

Many of Ken and Anne's recent books are set in New York City and are so thoroughly integrated into the actual streets and parks that readers have commented on the fact that the City is almost a character in the books. In July of 2013, they published a mainstream novel called KATE AND THE KID through Wings ePress. In July of 2014, Ken and Anne published a novel for 'Tween readers, entitled THINGS ARE NOT WHAT THEY SEEM. A mainstream/suspense novel featuring attorney Jane Larson, PRAISE HER, PRAISE DIANA, was published by Melange Books on October 16, 2014. A second Jane Larson mystery, WEAVE A MURDEROUS WEB, was published in early 2016.

Ken and Anne also write books for middle readers. STONE FACES, an Alice and Friends book was published by MuseItUp Publishing in 2016. BROWNSTONE FACES, second in the series, will be released in 2017.

I got the idea while I was reading the novel that there were a few connections – and that ended up being right. Gracemary Healy didn’t seem like a very nice character – she appeared to be one of those selfish and greedy people.

There were one or two nice minor characters in this book that I ended up liking – and am hoping that will make a presence in future books in this series. Jane Larson is a very resilient character.

It was lovely reading another book from these authors – the very beginning of this book seemed a little wonky, but I very quickly got into the novel after that; and it was a pleasure to read.