Review - Bones of the Earth by Eliot Pattison 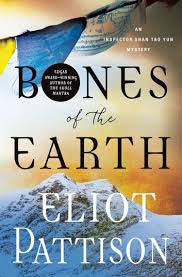 After Shan Tao Yun is forced to witness the execution of a Tibetan for corruption, he can’t shake the suspicion that he has instead witnessed a murder arranged by conspiring officials. When he learns that a Tibetan monk has been accused by the same officials of using Buddhist magic to murder soldiers then is abruptly given a badge as special deputy to the county governor, Inspector Shan realizes he is being thrust into a ruthless power struggle. Knowing he has made too many enemies in the government, Shan desperately wants to avoid such a battle, but then discovers that among its casualties are a murdered American archaeology student and devout Tibetans who were only trying to protect an ancient shrine.

Soon grasping that the underlying mysteries are rooted in both the Chinese and Tibetan worlds, Shan senses that he alone may be able to find the truth. The path he must take, with the enigmatic, vengeful father of the dead American at his side, is the most treacherous he has ever navigated. More will die before he is able to fully pierce the secrets of this clash between the angry gods of Tibet and Beijing. The costs to Shan and those close to him will be profoundly painful, and his world will be shaken to its core before he crafts his own uniquely Tibetan form of justice.

Described as "a writer of faraway mysteries," Eliot Pattison's travel and interests span a million miles of global trekking. After visiting every continent but Antarctica, Pattinson stopped logging his miles and set his compass for the unknown. Today he avoids well-trodden paths whenever possible, in favor of wilderness, lesser known historical venues, and encounters with indigenous peoples.

An international lawyer by training, early in his career Pattison began writing on legal and business topics, producing several books and dozens of articles published on three continents. In the late 1990's he decided to combine his deep concerns for the people of Tibet with his interest in venturing into fiction by writing The Skull Mantra. Winning the Edgar Award for Best First Mystery-and listed as a finalist for best novel for the year in Dublin's prestigious IMPAC awards-The Skull Mantra launched the Inspector Shan series, which now includes eight novels - both The Skull Mantra and Water Touching Stone were selected by Amazon.com for its annual list of ten best new mysteries. Water Touching Stone was also selected by Booksense as the number one mystery of all time for readers' groups.

The Inspector Shan series has been translated into over twenty languages around the world. The books have been characterized as creating a new "campaign thriller" genre for the way they weave significant social and political themes into their plots. Indeed, as soon as the novels were released they became popular black market items in China for the way they highlight issues long hidden by Beijing.

In 2015, Eliot Pattison received the prestigious "Art of Freedom" award from the Tibet House along with the likes of radio personality Ira Glass, singer Patti Smith and actor Richard Gere for his human rights advocacy in Tibet.

Pattison's longtime interest in another "faraway" place, the 18th century American wilderness and its woodland Indians-led to the launch of his Bone Rattler series, which quickly won critical acclaim for its poignant presentation of Scottish outcasts and Indians during the upheaval of the French and Indian War. In Pattison's words, "this was an extraordinary time that bred the extraordinary people who gave birth to America," and the lessons offered by the human drama in that long-ago wilderness remain fresh and compelling today.

Eliot Pattison has presented his work at many conferences and high profile venues, such as the Smithsonian, the Tibet House, the International Campaign for Tibet, Gettysburg's "History Meets the Arts" Festival, and the World Affairs Council.

A former resident of Boston and Washington, he resides on an 18th century farm in Pennsylvania with his wife, three children, and an ever-expanding menagerie of animals.

I thought that this was quite a well-written book – it was of the slower paced variety; but there’s also a lot of culture woven into the story throughout the book as well. The second half of the book was very fascinating as things started coming together.

If you’re someone who enjoys reading a crime mystery that’s got foreign culture weaved in, be sure to add this book to your reading list. I ended up giving this book a four star rating and got a copy in exchange for an honest review.

It’s wonderful reading about different cultures at times – and this one definitely hit the spot. I’ll be reading more books by this author in the future.