Review - Over You by Lucy Diamond 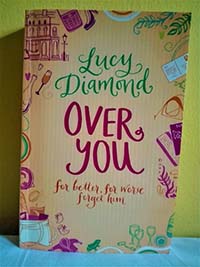 Josie, Nell and Lisa go back a long way - they were flatmates, soulmates and best mates back in their twenties when life was one long party.

Five years later, things are different. Josie is married with kids in deepest suburbia, free-spirit Nell has travelled the world, and Lisa is on the path to career glory (and the salary Premiership). A reunion weekend in London seems a great idea to Josie . . . until she discovers something which will change the course of her life forever.

Lucy Diamond grew up in Nottingham and went to university in Leeds where she studied English Literature. After graduating, she worked in publishing and at the BBC, and in her spare time she began writing children’s books under a number of different pen names.

Two small children later, an evening class in creative writing motivated her to try a longer piece of fiction and explore some of her own feelings about motherhood. This eventually became a novel, Any Way You Want Me, and she was thrilled when Pan Macmillan made her an offer of publication.

Now the author of fourteen novels and a Sunday Times bestselling author, Lucy writes with warmth and honesty about the joy and surprises, as well as the complications, that love, family and friendships can bring.

Lucy now lives in Bath with her husband and three children and writes full-time.

I flew through this book – and though it was nice and light; there were some things that left me a bit frustrated with this novel.

The point of view was told from Josie Winters’ perspective – and I would have liked to hear Pete’s side as well; considering that he appeared to be the type of character he was.

Josie unfortunately seemed to be one of those characters that could barely cope on her own – I wasn’t expecting her to turn her back on some of the relationships that she had; but she should have seen her own part in it.

I have read another one of this author’s books previously, and I’ll definitely be reading more in the future – these are the sort of books that make for light reading.