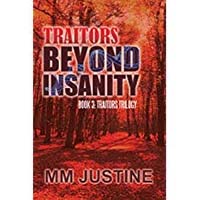 Althonat Global’s, CEO, Dr Martina Strömstedt Edgren discovers a group of corrupt politicians and businessmen have hired a mad scientist to perform grotesque and inhumane experiments on unwilling human test subjects in a bid to push for new controversial regulations in the national healthcare system. At the onset of the controversy, Martina staked her life to save humanity. The battle turns personal, threatening her family.

As these foes continue to harass and spy on Martina, she does the same to them, steadily collecting the evidence she needs to expose their misdeeds, including corporate espionage, illegal experimentation, human trafficking and even murder.

She discovers a troubling link between a member of the group and her late father. The link leads her to China in a frightful bid to take control of a rival company. In China, the pharmaceutical war turns vicious. Martina is kidnapped. Will Martina save herself?

MM Justine, is a Swedish/Ugandan author. She was born in Uganda, the pearl of Africa, where she grew up on the shores of Lake Victoria, in Entebbe. She has traveled widely, lived, and worked on four continents. She writes fiction from facts to educate the unknowing, depicting the turbulent world we live in. Traitors from Inside Out, is the first instalment in the Traitors Trilogy. It is a heart throbbing thriller, designed to keep your pulse pounding through to the second and third instalments.

MM Justine writes articles in the Writers Journal Kings Calendar and regularly publishes at iPatriot. She continues with her passion and vocation with the same fervor and excitement to travel the world.

MM Justine is a Corporate Executive with long experience in both public and private sector. MM Justine lives in Sweden.

This ended up being a bit of a dark book – one I felt could have been a little bit shorter with things being wrapped up a little bit quicker than they were. There was quite a bit of scene setting in the beginning – with a bit of a refresher of some of what went on in the previous books.

Martina Strömstedt Edgren is definitely a very independent as well as someone who’s resilient; which is something that I appreciated about her.

Even though I don’t expect every end to be tied up neatly; I was a bit disappointed that Josef Fagerlind hadn’t been brought to justice by the end of the book. I ended up giving this book a three star rating and got a copy in exchange for an honest review.

I’m impressed by this author’s writing – and definitely can’t wait to see what novel she writes next.