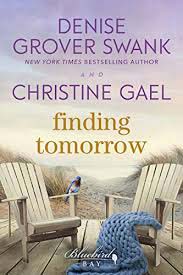 Celia Burrows thought she had it all—a handsome husband, two successful children, and a gorgeous beach house on the Northern coast of Maine. But her perfect life cracks apart when her husband of thirty years informs her that he’s leaving. In a note. And since problems come in threes, her adult children reveal they’ve both been struggling with issues of their own.

Before the separation, Celia was the main caretaker for her elderly father, but as her sisters step up to help in the wake of her troubles, neither of them takes to the role. Being tethered in Bluebird Bay is a nightmare for Anna, the youngest, whose passion for travel photography has taken her around the world. And Stephanie has struggled ever since her husband died in a freak boating accident a couple of years ago.

As Celia begins to come to terms with her own shocking loss, she’s surprised to feel a giddy sense of freedom. For thirty years, she’s buried her own dreams in support of her husband’s vision. But that was the past. It’s time to pick herself up, dust herself off, and create a better, more fulfilling tomorrow. Now, if only she can convince the people she loves to do the same...

New York Times, Wall Street Journal, and USA Today bestselling author Denise Grover Swank was born in Kansas City, Missouri and lived in the area until she was nineteen. Then she became nomadic, living in five cities, four states and ten houses over the course of ten years before she moved back to her roots. She speaks English and smattering of Spanish and Chinese which she learned through an intensive Nick Jr. immersion period. Her hobbies include witty Facebook comments (in own her mind) and dancing in her kitchen with her children. (Quite badly if you believe her offspring.) Hidden talents include the gift of justification and the ability to drink massive amounts of caffeine and still fall asleep within two minutes. Her lack of the sense of smell allows her to perform many unspeakable tasks. She has six children and hasn't lost her sanity. Or so she leads you to believe.

Christine lives with her sweet, funny husband in South Florida, where she spends the majority of her day writing and consuming mass amounts of coffee. Her favorite pastimes include playing pickle ball and tennis year-round, and texting pictures of palm trees and the beach to her New England-based friends in the wintertime.

will hopefully both entertain and empower the women in her own age group.

Connect with the Author(s):

I liked how Celia Sullivan got her new career going as well as the more laid-back approach that she took on. The conversation that Stephanie and her father had near the end of the book was very touching.