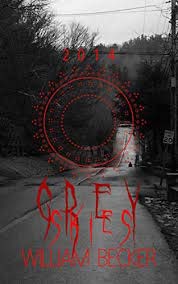 Roman Toguri finds himself burying the body of a nun in Boone, North Carolina. As the skies darken and it begins to storm, he is forced to shove the corpse into his trunk and take it home for the night, unaware of the torment that playing God will bestow upon him.

Enter Hell with two bonus short stories: The White Shade, an ultra-violent look into the mind of a mass shooter, and The Black Box, a psychedelic dive into weird horror.

William Becker is a young horror author with a mind for weirder sides of the universe. With an emphasis on complex and layered storylines that tug harshly on the reader to search for deeper meanings in the vein of Silent Hill and David Lynch, Becker is a force to be reckoned within the horror world. His works are constantly unfathomable, throwing terror into places never before seen, while also providing compelling storylines that transcend the predictable jumpscares of the popular modern horror.

His first novel, WEEPING OF THE CAVERNS, was written when he was 14. After eight months of writing, editing, and revising, the story arrived soon after his 15th birthday. During the writing sessions for his debut novel, he also wrote an ultra-controversial short story known as THE WHITE SHADE that focused on the horrors of a shooting. Living in a modern climate, it was impossible for THE WHITE SHADE to see the light of day. Following a psychedelic stint that consisted of bingeing David Lynch movies, weird art, and considering the depth of the allegory of the cave wall, he returned to writing with a second story, THE BLACK BOX, and soon after, his second novel, GREY SKIES.

Note: This is the only form of social media that was found about the author.

I had read a book involving surrealism previously; and wasn’t such a huge fan of it. At first, I wasn’t too sure about this book. If you’re someone who hasn’t tried reading surrealism before, this is a good book to start with.

I was quite impressed with the way this book was put together. Though one thing I will say is that I would have liked to know how Roman Toguri became the person he did – simply because throughout most of the book, he seems like a perfectly normal person, despite the fact that he might have had anger and drug issues.

Even though this book was a bit dark for me and that it seems like the author prefers writing dark horror novels, I’m definitely intrigued to read more of his works in the future.