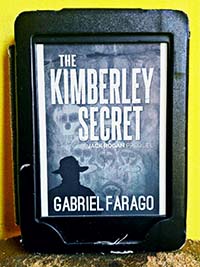 When celebrated war correspondent Jack Rogan receives a phone call during a bloody battle in Afghanistan, he knows something is wrong; his father is dying. With his last breath, Rogan’s father makes a disturbing revelation that rocks his son to the core and leaves him pondering who he really is, and where he came from. With his world turned upside down, Rogan soon finds himself irresistibly drawn into a desperate search to find his true identity, and turns to an old friend for help. On a dangerous journey of discovery that takes him around the globe and the remote wilderness of outback Australia, Rogan follows clues hidden in unexpected places to uncover the truth. Will Rogan succeed? Will the truth – if and when he finally finds it – crush him, or will lifting the curtain of uncertainty and doubt be liberating, and finally bring peace by showing him who he really is?

Gabriel Farago is the international, bestselling and award-winning Australian author of the Jack Rogan mysteries and thrillers series for the thinking reader. As a lawyer with a passion for history and archaeology, Gabriel had to wait for many years before being able to pursue another passion--writing--in earnest. However, his love of books and storytelling started long before that.

Born in Budapest, Gabriel grew up in post-War Europe, and after fleeing Hungary with his parents during the Revolution in 56, he went to school in Austria before arriving in Australia as a teenager. This allowed him to become multi-lingual and feel 'at home' in different countries and diverse cultures. Shaped by a long legal career and experiences spanning several decades and continents, his is a mature voice that speaks in many tongues. Gabriel holds degrees in literature and law, speaks several languages and takes research and authenticity very seriously. Inquisitive by nature, he studied Egyptology and learned to read the hieroglyphs. He travels extensively and visits all of the locations mentioned in his books.

'I try to weave fact and fiction into a seamless storyline,' he explains. 'By blurring the boundaries between the two, the reader is never quite sure where one ends, and the other begins. This is of course quite deliberate as it creates the illusion of authenticity and reality in a work that is pure fiction. A successful work of fiction is a balancing act: reality must rub shoulders with imagination in a way that is both entertaining and plausible.'

If you like historical thrillers, excitement, mystery and suspense, if you enjoy exotic settings, colourful characters and fast-paced action, if you like to learn about interesting, well-researched subjects that tease your intellect and imagination, then once your step inside, Gabriel will show you his world; the world of the storyteller. Shaped by a long legal career and experiences spanning several decades and continents, his is a mature voice that speaks in many tongues.

A writer like Gabriel, sees the world through a different lens. Using creativity and imagination, He endeavours to weave fact and fiction into seamless stories that have only one aim: to entertain you.

This was a quick read, and I feel that Jack Rogan’s life could have been explored a little bit more than it was; even though he was very focused on the quest that he was on. I ended up giving this novella a three star rating and got a copy in exchange for an honest review.

Even though this book was short and to the point – I still enjoyed the writing; and it was nice to read a book from this author again.