Review - Thirteen Across by Dan Grant 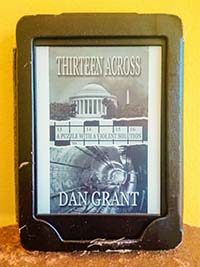 Genre: Action, Crime, Thriller with a bit of a medical theme interwoven

A month ago, the news broke on government-sponsored, illegal human research trials. Those events had put the entire intelligence community on edge, with the White House at the center of the controversy.
- Chapter 11, Thirteen Across

Kate Morgan is on an Orange line train when it is bombed. Phillip Barnes has made his attacks on the nation’s capital personal. Thirteen Across is an ominous sign of the events to come. Kate finds herself thrust into the center of a grander conspiracy.

Barnes reveals an unfolding puzzle—its challenge charts a course, one that expires at midnight. Puzzle solutions and destinations expose a dark past built on illegal human research and a quest for the Perfect People Initiative. Kate must log the tours. She’s charged with saving those that she can. If she survives, the final destination is a place for Kate to atone for her past sins. She’s murdered a killer’s family, and there are consequences for that.

The FBI brings in real-life puzzlemaster, Will Shortz, to riddle out stops, while Kate works the frontlines to save seven victims. Each stop is meant to cause pain and torment, yet reveal secrets.

The clock starts at the Foggy Bottom Metro station and ends seven stops later. What Kate thinks she knows about her past is tested as is her ability to survive her trials.

Dan has always loved stories and intriguing tales, especially suspense and thrillers that weave science, medicine, or technology into the fabric of the drama.

He is a licensed professional engineer with degrees from Northern Arizona University: a bachelor's in electrical engineering and masters' in college education and English with an emphasis in creative writing.

His engineering work has provided opportunities to work with a variety medical and technological applications, as well as get behind the scenes at military facilities. Those experiences have provided conspiracy threads that form a broader storytelling tapestry.

For The Singularity Witness, Princeton University was selected as a story backdrop and a place for characters to take root because of its unique setting, historical connections, and its active research programs. For a year, Dan and his wife lived outside the town limits and fell in love with the place.

Dan lives in Colorado, where he's working on his next thriller, entitled Thirteen Across.

In this book you end up following two or three main characters with a few minor characters slotted in throughout the book, and that takes place in Washington DC. From the start – you know who the villain is, and as you go through the book you slowly start finding out why he’s doing the things that he is.

There was sufficient world building and descriptions in this book, along with character development. The plot is enticing – which keeps you reading.

Philip ends up being one of those characters that has a mixture of qualities – he’s one of those meticulous sort of people and who is very intelligent – but has gone off the rails a little bit. Not only that, he has been trained to work with some dangerous objects, especially for someone who is seeking revenge like he is.

I like how the characters were slowly introduced, and by the end of the novel – things slowly start falling apart for the villain. At times, there were some characters that were mentioned in passing – but that weren’t present in the book, that I hope might get introduced in a novel in the future – since I was interested in finding out their story. If this is the first novel that you are reading from this particular author, Kate Morgan might end up being a character that you’d like to get to know more.

I ended up giving this novel a four star rating. If you’re someone who’s into crime thrillers that has a little bit of a medical theme, try picking this book up.

This book is done in third person, with the chapters being quite short – each chapter having one or two character’s POV. One character that interested me was Rachael Pratt – she seemed to have a bit of a history, though I do wish that there had been a little bit more about her history.

You end up finding out that one of the main characters knows the villain, and as the book goes on, you find out bits and pieces about the main characters. I got the idea that the author might have gotten some inspiration from books like ‘The Da Vinci Code’ and ‘The Bone Collector’. Elements that are involved in this book are things like the military, FBI, medical aspects as well as a small touch of politics.

I received a review copy.