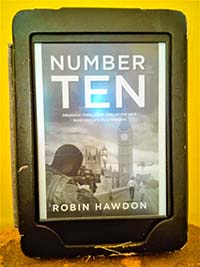 Unknown forces attempt to assassinate radical new British Prime Minister, James Torrence. No-one knows whether they were organised by business magnates, criminal oligarchs, or jihadist extremists, all of whom are threatened by his rule. What is known is that they are getting information from inside Number Ten Downing Street. Paul Gunter, bright young member of the PM's staff, is arrested by MI5 in the middle of the night, and finds himself falsely implicated in the assassination attempt. He has to fight for his life against all involved parties, using his inside knowledge of Downing Street processes, and the reluctant help of senior staff member, Andrea Holt, to extricate himself. Will the pair survive against vastly superior forces? Will James Torrence and his fragile government endure amidst the revelations? Will love win out against political intrigue? Suspense, romance, and high action ranging across modern London's extraordinary cityscape and beyond.

Robin Hawdon's plays include some of the stage's most popular comedies. Productions in over 40 countries and 20 languages. He is also the author of several novels with five star Amazon reviews.

Hawdon's epic first novel, 'A RUSTLE IN THE GRASS', written thirty years ago, has since attracted a list of remarkable 5 star reviews on Amazon, and has been republished by Thistle - "A fantastic, well-paced, beautifully told story that grows on you more and more the older you get...."

His novel 'SURVIVAL OF THE FITTEST' is the dramatic story of one man's modern investigation into the most fundamental controversy facing humanity, and one woman's involvement with the man who launched that controversy a century and a half previously. Also attracting a list of 5 star Amazon reviews.

This book will definitely keep you reading for its plot. If you’re one of those that just enjoys plot – then put this book on your TBR. But if you’re one of those who wants a fair amount of character development along with the plot, then this might not be the book for you.

Even though there are some main characters in the book, you don’t get to know them as people a huge amount. I was hoping for more of a closed conclusion with one or two characters. I ended up giving this book a three star rating and got a copy in exchange for an honest review.

Since this is the first time I’m reading a book by this author – I’d be interested to see where their writing career goes.