Review - Whispers in the Dark by Laurel Hightower 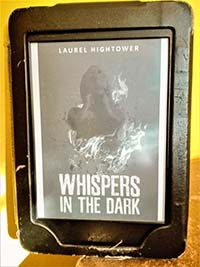 Rose McFarland is a trained killer--a Memphis S.W.A.T. sniper with a secret. Her team knows about the burn scars that lurk under her clothes, a legacy of the house fire that killed her father and brother sixteen years before. Her supervisors know that she spent two years in a rehabilitative facility, healing and learning to cope with the emotional trauma of the fire. But no one knows about the visions that drove her there, angry spirits that consumed her childhood, alienated her from her family and made her doubt her own sanity--the Whispers.

When Charlie Akers, a half-brother she never knew, ends up on the wrong side of Rose's rifle, she unwittingly sets off a chain of events that puts her family in the middle of increasingly dangerous paranormal visitations. Charlie won't stay dead, and soon ghosts from Rose's past are creeping back into her life. People she's killed in the line of duty, family she thought long buried, every one of them under the influence of Rose's greatest fear, the Whispers themselves.

As the walls between our world and the world of the dead grow thin, Rose will have to face her old nightmares to stop the Whispers from breaking free. If she can't, it won't just be Memphis that falls to the dead--there will be no safe place left on earth for the living.

Laurel Hightower grew up in Kentucky, attending college in California and Tennessee before returning home to horse country, where she lives with her husband, son, and two rescue animals. She works as a paralegal in a mid-sized firm, wrangling litigators by day and writing at night. A bourbon and beer girl, she's a fan of horror movies and true life ghost stories. Whispers in the Dark is her first novel.

In this book, there are those who abuse their supernatural powers – though there were times when the main character, Rose McFarland, seemed like an interesting character.

This was a book that captivated me – from beginning to end. It was a real page turner; which I ended up giving a four star rating and got a copy in exchange for an honest review.

Since this is a debut novel – I definitely can’t wait to read more upcoming books from this author.