Can you believe that we’re technically halfway through the year?! It’s crazy!

Most of May was mostly relatively on track despite some hosting domain problems, and then the last week of May happened – where I got a new puppy (I will post a photo). Now that it’s the beginning of June; things are slowly getting back on track and I’m doing some catching up.

Anyways – onto the bookish side of things: I read six books this month – and did one re-read. Here is a small list of the books I enjoyed during the month of May.

- Waiting for Wyatt by SD Hendrickson

Alright, so – May unfortunately didn’t go as planned, so I’ll just be carrying over the choices from last month, which is now going to become JUNE’S reads:

If things go well, I’m hoping to get at least one of these in.

I’ve got a little bit of review reading to do for June, so there is a chance that I won’t get a huge amount of leisure reading done. There is a new release coming out this month, but I’ll be talking about it closer to the time. Now for this: 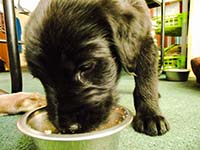 The little puppy that I got near the end of May is a Lab X Black Russian Terrier. This coming Monday she will be 7 weeks. I know that she’s going to be taking up quite a bit of time, and I’ll occasionally be posting pics of her on social media. I also intend to start her puppy training in June as well. And her name is Iria.

Hope you had a great month of reading,