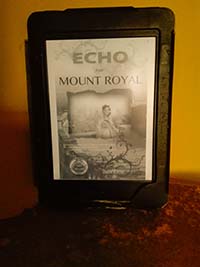 ‘How many of my memories of 1951 are real and how many are only the imaginings of an old woman?’

Montreal, 1951. Rebecca Wiseman, 18, a bright college student, lives with her working-class parents. At a local dance, she meets a handsome young man but has little hope of seeing him again. When Sol Gottesman asks her on a date, her joy mingles with disbelief when she learns he is the son of a wealthy businessman.

Sol takes her in his family's chauffeured Rolls-Royce to the most expensive restaurant in the city, introducing Rebecca to a world of upper-class wealth and privilege. Rebecca is head over heels in love and believes her life is perfect.

But despite Sol's outward charm, he lacks self-confidence and trust. He reveals the simmering conflicts in his family and his fears that his brother will drive him out of the family business. Rebecca, headstrong but naïve; wants to protect Sol and help him to stand up to the pressure from his family.

Soon after their engagement, a shocking family secret of child abuse comes to the surface. Rebecca tries to convince Sol that her love and support is all he needs. A late-night telephone call threatens to change her life forever.

Dave Riese grew up in Arlington, Massachusetts. He attended Bates College in Lewiston, Maine, majoring in English literature. During his junior year, he studied English literature at Oxford University. For his thesis, he wrote essays, poems and short stories about his travels in Europe.

After graduation, Riese was hired by a Boston insurance company for its IT department despite having no computer experience. He later learned he was hired for his writing and communications background. He often says, "An English degree is valuable after all."

Dave renewed his interest in writing when he retired after 35 years in the information technology industry in 2012. Since then, he writes 3 - 4 hours a day, usually in a local coffee shop. He's at work on his second novel, scheduled for early 2019.

He and his wife live north of Boston. They have four grandchildren.

This book is told from the point of view of Rebecca Wiseman – who; as an old woman is recounting her memories of a romance that took place between her and a man called Sol Gottesman in the 50’s.

Even though Rebecca would be considered an independent woman for someone in her generation, she fell hard for Sol – and had to move forward once things had ended.

In this novel, the reader gets a glimpse of things like status and even smaller ones of religion – also of how things were less rushed and simpler. The story was well told – and I ended up liking Rebecca as a character as well as a narrator; despite the fact that she fell apart when things went wrong. There was a lot of balance going on in all aspects in this book.

Even though I knew how Sol’s parents felt about Rebecca, I was still hoping for some sort of clearer and verbal dislike from their side – the person that took on this role in the family was Sol’s brother – Ezra; though I got the idea that he held a lot more resentment and hate than his and Sol’s parents did.

The author also had a way of humanizing a lot of the characters as well. Out of all of the characters, Ezra was the most unlikable. One thing I will say is that I found Ezra interesting as a character – what made him the way he was?

I ended up giving this book a four star rating – if you’re into romances where things were a little bit more conservative and traditional, pick this book up.

I wasn't the hugest fan of Ezra; and even though Max was a minor character - he's still the sort of person that the reader can warm up to. I thought it was sad the way things ended as they did. I feel that once Rebecca Wiseman was in the correct frame of mind, she should have confronted Sol's parents. I received a review copy.