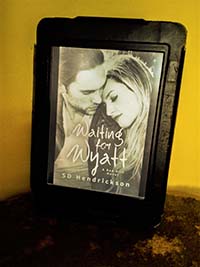 My name is Emma Sawyer.

I met Charlie and Wyatt on the same sultry, summer day. The moment happened out of nowhere, all fast and quick and a little strange. Or maybe that was just Wyatt's personality.

It was Charlie that brought us together. Little Charlie with those ridiculous ears. I found the dog, waiting in a pool of his own blood. Waiting for someone. Waiting for me.

Now Wyatt, he wasn't waiting for anyone. At least that's what he said, except I saw something different in the broken guy all alone out in the woods. I knew he needed me before he knew it himself.

Wyatt with his hidden dimples. Wyatt with his warnings to stay away. He was a hard lump of coal, ready to burn everything around him. The more he burned, the more it pulled me into the pain I saw etched on his troubled face.

I wanted to help Wyatt. I wanted to save him like he had saved all the Charlies in the world. He told me not to fall for him, but I did anyway. I fell hard and fast and deeply in love with Wyatt Caulfield.

But that was before I knew his secret.

SD Hendrickson received a Bachelor's of Science in Journalism and Public Relations from Oklahoma State University. She is the author of The Mason List, Waiting for Wyatt, and My Lucky Days.

This book was very moving at times – and out of the two narratives; I enjoyed Wyatt’s the most. If you’re into contemporary YA with a little bit of romance mixed in – try this book. I ended up giving this leisurely read a four star rating.

It’s the first time that I’m reading a book by this author – and if this one is anything to go by, I’ll definitely be picking up more.