Review - You are a Badass by Jen Sincero 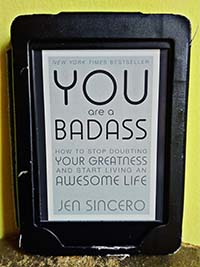 YOU ARE A BADASS IS THE SELF-HELP BOOK FOR PEOPLE WHO DESPERATELY WANT TO IMPROVE THEIR LIVES BUT DON'T WANT TO GET BUSTED DOING IT.

- Identify and change the self-sabotaging beliefs and behaviours that stop you from getting what you want.

- Create a life you totally love. And create it NOW!

- Make some damn money already. The kind you've never made before.

By the end of You Are a Badass, you'll understand why you are how you are, how to love what you can't change, how to change what you don't love, and how to use The Force to kick some serious ass.

Jen Sincero is a #1 New York Times bestselling author, success coach and motivational cattle prod who's helped countless people transform their personal and professional lives via her products, speaking engagements, newsletters, seminars and books. Her #1 New York Times bestseller, You Are a Badass: How to Stop Doubting Your Greatness and Start Living an Awesome Life (2013), has sold well over a million copies, is available in twenty-plus languages, and continues to grow in popularity around the globe. Her follow-up, You Are a Badass at Making Money: Master the Mindset of Wealth (2017), also a New York Times bestseller, is written with the same inimitable sass, down-to-earth humor and blunt practicality that made You Are a Badass an indomitable bestseller and Jen a celebrated voice in the world of self-development. Based on her own transformation, from a frustrated forty year-old living in a converted garage watching tumbleweeds blow through her empty bank account, to a successful business owner traveling the world in style, You Are a Badass at Making Money is a testament to the fact that, in Jen's words: "If my broke ass can get rich, you can too."

As a highly sought-after speaker, Jen has shared her signature brand of motivational comedy with everyone from women entrepreneurs to multi-national corporations to non-profits to educational institutions to her mom's book group. In 2011 she sold most of her possessions and spent the next three years running her business from all corners of the globe, writing, speaking, coaching and encouraging people to live lives of unbridled awesomeness.

Jen and her work have appeared in a variety of media outlets including the New York Times, The Dr. Oz Show, Oprah Magazine, Success Magazine/Radio, Money Magazine, Comedy Central, Forbes, Fast Company, Bloomberg, Interview, Cosmo and The Howard Stern Show. Her other books include the semi-autobiographical novel, Don't Sleep With Your Drummer (2002) and The Straight Girl's Guide to Sleeping With Chicks (2005).

I found this book quite motivational; and the author has a way of clarifying and simplifying things. The resources at the back of the book were helpful as well. I ended up giving this leisurely read a four star rating.

This is the first time that I’ve read a book by this author, and have gotten myself another one to read as well.

It’s going to be nice to see what she comes out with in the future.