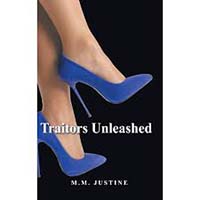 Althonat Global CEO, Dr. Martina Strmstedt Edgren hovers between life and death in hospital after a Dodger van slammed her Volvo into the icy sea. It may have been attempted murder, nearly identical to her parents’ fatal accident.

A tale filled with action, suspense, and deception in a world consumed by greed, corruption, and dreams that failed, leaving the masses grasping for hope that one fine morning the powers of evil will be vanquished.

The tension builds in the second half of The Traitors Trilogy and roars full steam fast paced to a haunting ending.

MM Justine, is a Swedish/Ugandan author. She was born in Uganda, the pearl of Africa, where she grew up on the shores of Lake Victoria, in Entebbe. She has traveled widely, lived, and worked on four continents. She writes fiction from facts to educate the unknowing, depicting the turbulent world we live in. Traitors from Inside Out, is the first instalment in the Traitors Trilogy. It is a heart throbbing thriller, designed to keep your pulse pounding through to the second and third instalments.

MM Justine writes articles in the Writers Journal Kings Calendar and regularly publishes at iPatriot. She continues with her passion and vocation with the same fervor and excitement to travel the world.

MM Justine is a Corporate Executive with long experience in both public and private sector. MM Justine lives in Sweden.

This book has a slow start to it; and recollects little bits and pieces of what went on in the previous book; though there were times at the beginning of the novel when it felt as if the same scenarios kept on playing out again and again, especially in terms of the characters sketchy actions and the greed behind it.

There were aspects of Martina Stromstedt Edgren’s relationship that was nice to read about; though she ends up going through a lot of ups and downs. I ended up giving this book a four star rating and got a copy in exchange for an honest review.

Out of the two books that I’ve read so far, the first one was a little bit better. For me, this book only really started picking up halfway through the novel.