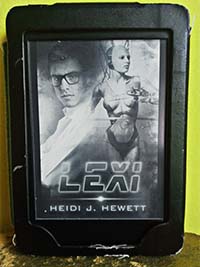 John Michael Kirkpatrick is anxious to make his mark with his work on his father’s university research project, LX8000, a female robot built to mimic humans. But LX8000, or “Lexi,” as John Michael calls the playful, insatiably curious bot, has a mind of her own, and when she unexpectedly turns up on his doorstep in the middle of the night, she sets them both on a journey from the glittering city to the last outpost of human habitation. As time runs out, he must make a choice that will determine his own future: hand Lexi over for reprogramming, or help her escape from the people who bought her. Could he really be falling in love . . . with a machine?

Heidi J. Hewett writes mysteries, science fiction, romance, and some juvenile fiction. When she is not reading or writing, she plays the violin, badly but with gusto, inspired by Sherlock Holmes. She also enjoy tinkering with recipes and inflicting strange food combinations on her hapless family. Her secret guilty pleasure is Hong Kong cop movies.

This book was set at quite a nice and exciting pace. This had an Urban Sci-Fi feel to it, there’s also some mechanical jargon here, but it’s still easy to follow the story-line. I got the idea that there’s a bit of family history with John Michael Kirkpatrick and it seemed quite intriguing. It felt as if John was one of those geeky nerds that had access to the in-crowd. I ended up giving this book a four star rating and got a copy in exchange for an honest review.

I would say that this is my second favourite sci-fi book, especially since it was made relatable by having real world environments in it.