Review - Interview with the Devil: Part 1 by Skylerr Darren 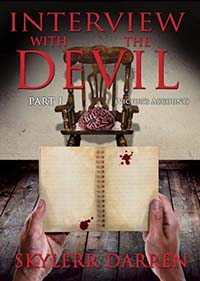 "There sat a frail, abnormally-pallid African-American man. His weight looked rather questionable. He looked as if he hadn't eaten in months, judging by the fact that his integral skeleton had been visible through his diminished skin. He stared at me with no facial expression. He just sat there, staring."

Satan, the brooding, scriptural ghoul that takes on the responsibility for murder, perversion, and the gruesome deaths of children. Society views these horrors as a grim nightmare-a nightmare in which one would desperately attempt to wake up from. But in reality, you simply just can't wake up from a nightmare, for both reality and fiction have become one. Victor, a timid young college student dreadfully awakens into such a demonic ordeal from the repulsive dismiss of his relatives, to macabre dreams and morbid occurrences. Do not look at Interview with The Devil: Part 1 as a mere book but instead the detour into your own self-morality.

Born in the city of Upland, California on August 18, 1998, Darren displayed a broad interest in drawing and writing short stories while still in elementary school, and at the age of eight years old he developed a comic strip about a rabbit with supernatural abilities which eventually lead to the publication of the short book in Skylerr's school library. Darren continued to pursue this creative passion which eventuated in him drifting off into the horror/thriller genre in which he calls "The darker side of life."

In the summer of 2014 at the age of fifteen and while still in high school, Darren attended VVC (Victor Valley Community College) and began studying English 50 and Art History to which he did well in. During this time, Skylerr began forming the concept to his would-be published novel 'Interview with The Devil: Part 1 Victor's Account' only knowing that he simply just desired to write and bring to life the most disturbing subject matters he could think of. The morbid aspect of life had always been a fascination of Skylerr's after years of watching horror movies and listening to horrorcore and he wanted to create something of his own.

At the end of 2015, his first book 'Interview with The Devil: Part 1 Victor's Account' had been completed, not even a year after graduating from high school (Mojave River Academy) at the age of sixteen. Aside from focusing on writing, Darren also enjoys painting on his leisure, the majority of his artwork taking on the role of disturbing shock art as well as writing music that caters to the horrorcore genre.

If you’re not into horror or gory descriptions; this definitely isn’t the book for you. The narrator explains a little bit about his life, but what I found strange is that he never spoke of any friends that he might have had. A lot of this novella was bizarre. This book was unfortunately not for me – I ended up giving it a two star rating and got a copy in exchange for an honest review.

I feel that this book could have been fleshed out better – with less gory aspects as well and still get the point across. There are better ways of exploring deplorable things humans do and the psychology that might lie behind it. Due to the contents of this book, a lot of the story came across as unrealistic. Horror can still be realistic and believable if it is done right.