Review - All the Light We Cannot See by Anthony Doerr 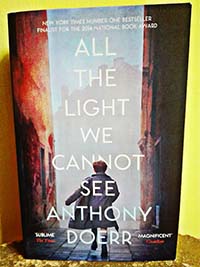 Marie-Laure has been blind since the age of six. Her father builds a perfect miniature of their Paris neighbourhood so she can memorize it by touch and navigate her way home. But when the Nazis invade, father and daughter flee with a dangerous secret.

Werner is a German orphan, destined to labour in the same mine that claimed his father’s life, until he discovers a knack for engineering. His talent wins him a place at a brutal military academy, but his way out of obscurity is built on suffering.

At the same time, far away in a walled city by the sea, an old man discovers new worlds without ever setting foot outside his home. But all around him, impending danger closes in.

Doerr’s combination of soaring imagination and meticulous observation is electric. As Europe is engulfed by war and lives collide unpredictably, ‘All the Light We Cannot See’ is a captivating and devastating elegy for innocence.

Anthony Doerr has won numerous prizes for his fiction, including the 2015 Pulitzer Prize. His most recent novel, All the Light We Cannot See, was named a best book of 2014 by a number of publications, and was a #1 New York Times Bestseller.

One thing I feel that this author does well is describe war very well; and has a very subtle writing style. This is a slow book that has a steady pace – this book is set against the backdrop of WW2, so if you prefer faster paced books, you might not like this one. I kept on expecting something big to happen, and that didn’t quite happen.

A lot of this book is quite sober, and the part I enjoyed the most is the section at the end after the war. You also don’t get a huge amount of insight into the characters; especially in terms of what they think about the war, there’s also some things that are left open-ended; as if the reader must decide for themselves how things went. I ended up giving this leisurely book a three star rating.

Even though this book wasn’t quite for me; there were still some aspects of it that I appreciated. I will consider picking up another book by this author in the future.