Review - Our Madiba by Melanie Verwoerd 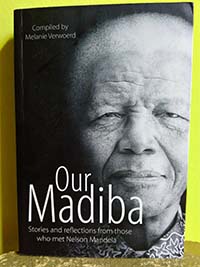 The Copy that I Read

Meeting Nelson Mandela simply took your breath away. He had a remarkable aura, which left you without any doubt that you were in the presence of greatness.

'Our Madiba' is a collection of anecdotes from people who met Mandela. From ordinary South Africans - his former bodyguard, the child he met in hospital, the woman who shared his birthday - to celebrities and leaders like Richard Attenborough, Angelique Kidjo, Francois Pienaar and John Carlin.

These stories reveal the traits that struck people about Madiba: His kind eyes, his broad smile, his mischievousness, his compassion and humility, his sense of humour and his genuine interest in the person meeting him.

Verwoerd was elected as a Member of Parliament for the African National Congress (ANC) during the first democratic elections in South Africa in 1994. She was the youngest woman ever to be elected. She was re-elected in 1999. In 2001 she was appointed as South African Ambassador to Ireland a position she held until 2005. Between 2007 and 2011 she was the Executive Director of UNICEF Ireland.

In 2007 Melanie was awarded with the Irish Tatler, International Woman of the Year award.

She currently resides in Cape Town, South Africa where she is doing consulting work for various NGOs.

Please note that there doesn’t appear to be any social media or website for this author.

It was wonderful reading about people’s accounts of different character traits that Mandela displayed; as well as a wonderful way to remember him by. I ended up giving this leisurely read a well-deserved four star rating.

Since this book was lent to me; I definitely plan on getting myself a copy at some stage.