Review - In Foreign Fields: How Not to Move to France by Susie Kelly 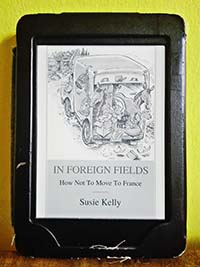 Susie and Terry dream of living in France. The dream comes true, but not in the way they had imagined.

Yes, the countryside is spacious and peaceful. On summer nights the stars skim the rooftops, the owls hoot and the nightingales sing. Sunflowers smile from their fields. The wine is cheap and the baguettes are crusty. The French neighbours are generous and gentle.

But then come the drug addicts, builders who cannot build, demanding compatriots, undercover cops and unwelcome guests. Susie begins to lose hope of attracting the fabled French philanderer and, far from appreciating their new home, the animals do everything they can to make life as difficult as possible. With her house literally crumbling around her, the number of odd characters Susie manages to attract are only matched by the assortment of creatures appearing from in and out of the woodwork. Terry almost dies, and Susie's resilience and good humour are tested to the limit.

Sometimes it feels more like taking part in a musical comedy than starting a new life in France.

As the date for Britain leaving the European Union draws close, and the British living in European countries still have no idea what the future holds for them after Brexit, Susie looks back on the beginning of her life in the country she loves and has called home for 23 years.

This is a first digital, edition of Two Steps Backwards, first published by Bantam/Transworld as a UK paperback. This first worldwide edition is revised and updated and, for the first time, includes photographs.

Susie Kelly was born in grey post-war London, and spent much of her childhood and young adulthood in the beautiful country of Kenya.

She now lives in south-west France with a menagerie of assorted animals, and is passionate about animal welfare.

Her first book "Best Foot Forward" was published by Transworld Publishers in 2003, followed by "Two Steps Backward" in 2004, and "A Perfect Circle" in 2006.

If her house caught fire and she could only save three things (apart from her animals, of course), they would be courage, compassion and a sense of humour.

I am absolutely amazed at the sort of things Susie endured; there were some incidents where I would not have had adequate patience available to me. But all the same I’m glad that she stuck it out in France, since it sounds like she’s really made a home there for herself – despite everything – she’s definitely quite hardy! I ended up giving this book a four star rating and got an ARC in exchange for an honest review.

This is the second book I have read by her; and have really enjoyed. I will most certainly be reading more of her books in the future.