Review - An Act of Penance by Ray Filasky 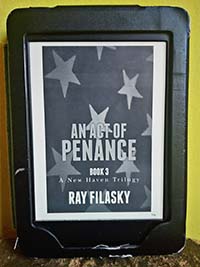 Nothing is ever what it seems!

This is the third and final episode in the New Haven Trilogy following the Haskins family through the hardships imposed by the establishment of New Haven, the gradual exposing of its perpetrators and the eventual discovery of the real reason behind it. Tee and Emma’s son Dylan is now the Vice President of the United States. He and his wife Jenn find out very quickly that one does not escape danger at that level, it only increases and the only remedy is to face it head on.

Unsure of who to trust and how to uncover the people behind it, the entire family faces peril as they fight not only for what they believe in, but for their lives as well. In the process they learn that not all government decisions are based on ideology, far too many are firmly rooted in greed.

For some, the conclusion brings redemption, for others it is refinement of character by fire and still others pay the ultimate price. Nothing is out of bounds in this thrilling conclusion.

Taking a detour into the world of fiction, he is excited to announce the release of a new novel, "The Bliss of Ignorance." This is the first book in the New Haven Trilogy and introduces us to Tee and Emma Haskins as they are forced to deal with the unexpected upheaval of nationalistic shortsightedness and societal tension.

This book appeared to be a little bit more well-written in places, with a more somber tone; though I did still very occasionally find words that were used in the wrong context. I would say that out of the series – writing-wise – this one was my favourite. There were quite a few characters to keep up with in this book, but eventually I did end up being able to identify all of them. One thing to take note of is that there wasn’t a huge amount that happened in the first half of the book. I ended up giving this book a four star rating and got a copy in exchange for an honest review.

It was nice to conclude this series, and I hope that the author carries on with their writing journey as well as making headway with regards to their learning more and improving as a writer.