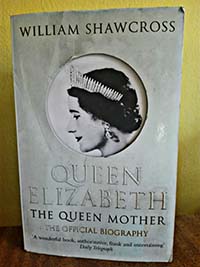 The official and definitive biography of Queen Elizabeth the Queen Mother, the most beloved British monarch of the twentieth century. Consort of King George VI, mother of Queen Elizabeth II, and grandmother of Prince Charles, Elizabeth Angela Marguerite Bowes-Lyon—the ninth of the Earl of Strathmore’s ten children—was born on August 4, 1900, and, certainly, no one could have imagined that her long life (she died in 2002) would come to reflect a changing nation over the course of an entire century. Vividly detailed, written with unrestricted access to her personal papers, letters, and diaries, this candid royal biography by William Shawcross is also a singular history of Britain in the twentieth century.

William Shawcross is a widely renowned writer and broadcaster.

The first thing I’ll say is that I haven’t ever been a huge follower of the Royal Family – but nonetheless, I thoroughly enjoyed this book. The Queen Mother had some wonderful traits and qualities; especially with the way things changed so much during her lifetime. I ended up giving this leisurely read a four star rating.

With this being my first proper in-depth introduction to the Royal Family, I most certainly wouldn’t mind reading more well-written accounts of them.