Review - Sketches of Life by A. Gavazzoni 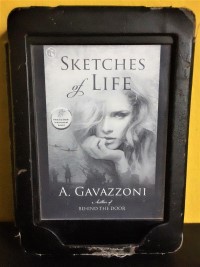 In the middle of WWII, France has surrendered to Germany, and young Lily, half French and half American, has her life turned upside down. A careless girl full of dreams, Lily must leave France and go to her father’s homeland, taking her mother with her.

Lily’s mother becomes completely dependent upon her teenage daughter, and Lily is forced to grow up quickly. Trying her best to support them both, balancing work and dreams of continuing her studies, Lily meets her first love and discovers passion and betrayal on her way.

Ninon is a survivor. Alone in the world, she works as an exotic dancer in a French cabaret called Le Passioné, where she moves her hips to put food on her plate until a new and dangerous opportunity is presented to her. Although Ninon has lost faith in love and God, life will show her surprises can be found around every corner.

France, the United States, Spain, Austria, and Argentina present the backdrops for an epic tale of people trying to adapt to a world in turmoil—one that’s filled with secrets and surprises.

A. Gavazzoni is the Brazilian author of a trilogy named Hidden Motives (Behind The Door #1, Lara´s Journal #2 and The Brilliant Game #3), she just released her fourth book "Sketches of Life".

A. Gavazzoni has been a lawyer for 29 years, a former professor of law and a writer of novels and legal books, but she is also a voracious reader.

She speaks four languages: English, French, Portuguese and Spanish. When she is not practicing law or writing, she enjoys many interests and is a very active person. She loves to dance (Tango) and workout.

She loves to travel, loves good wine, and has been studying astrology for fifteen years. She paints and loves to cook for her friends.

She has two poodles -Juno and Charlotte -and loves all animals. She is an aunt of four nieces who enjoy to paint and cook alongside their aunt. She lives in Brazil and is in the process of writing her next novel.

This story was quite intriguing – especially Lily’s story. The way things were done was clever, especially when it was revealed in the end who the characters were.

I was also left a little bit dejected over the fact that the characters had to take on a new identity. I gave this book a four star rating and got a copy in exchange for an honest review.

I ended up enjoying this book more than the previous one that I read from this author. The cover is absolutely gorgeous!