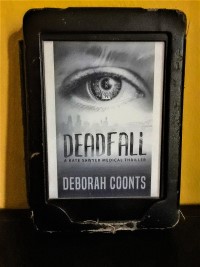 On the best day of Dr. Rita Davenport’s life, she jumps in front of a speeding London Underground train.

On the day she died, Dr. Davenport presented a paper highlighting a medical breakthrough that would change the treatment of Alzheimer’s. The breakthrough would undercut the billion-dollar Big Pharma business model, taking money from the grant writers, researchers, doctors and huge pharmaceutical companies who have made their life’s work developing drugs that don’t work.

To Dr. Davenport’s team, that is motive for murder.

They turn to Detective Kate Sawyer, one of their own—a participant in their study who is battling her own genetic form of Alzheimer’s. With her lover, Detective Beck Hudson; Dr. Davenport’s right-hand man, Thea Janeway; and Thea’s romantic nemesis and respected denizen of the Dark Web, Carter Livingston, Kate gets pulled deeper and deeper into the secret places where those on the fringes of synthetic biology ply their trade…for good and for ill.

The killer threatens to kill another of Dr. Davenport’s study participants unless Kate backs off…and he’ll keep killing until she stops.

With lives in the balance, Kate can’t stop…not until the last man falls.

But who will be next?

Deborah Coonts swears she was switched at birth. Coming from a family of homebodies, Deborah is the odd woman out, happiest with a passport, a high-limit credit card, her computer, and changing scenery outside her window. Goaded by an insatiable curiosity, she flies airplanes, rides motorcycles, travels the world, and pretends to be more of a badass than she probably is. Deborah is the author of the Lucky O'Toole Vegas Adventure series, a romantic mystery romp through Sin City. Wanna Get Lucky?, the first in the series, was a New York Times Notable Crime Novel and a double RITA™ Award Finalist. She has also penned the Kate Sawyer Medical Thriller series, the Brinda Rose Humorous Mystery series, as well as a couple of standalones.

This book felt fairly plot driven. The ending also felt pretty open, as if things weren’t quite wrapped up; so I’m assuming that there’s most likely going to be another book in this series. There were quite a few characters to keep track of.

It’s always enjoyable reading one of Deborah’s books – particularly the ones in the thriller genre.