Review - The Curious Case of the Missing Head by Gabriel Farago 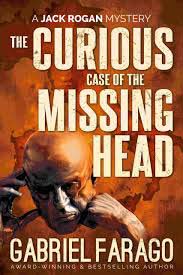 Esteemed Australian journalist Jack Rogan is on a mission to solve the disappearance of his mother in the 70s. But when a friend needs help rescuing a kidnapped world-renowned astrophysicist, he doesn’t hesitate. Struggling with more questions than answers, his investigation leads them aboard a hellish hospital ship, where instead of finding the kidnap victim, he’s confronted with a decapitated corpse.

As the search intensifies, Jack bumps up against diabolical cartels with hidden agendas. And when his research reveals dubious experiments, a criminal on death row, and a shocking revelation about his mother’s fate, he must uncover how it’s all linked.

Can Jack unravel the twisted connections and catch the scientist’s killer, or will the next obituary published be his own?

Even though this book has its share of villains – the author has a way of humanizing the drug lords and criminals that are involved. I found that the contract Professor Zachariah Stolzfus has agreed to was a little bit rigid – there was a particular situation near the end of the book that involved him that I wasn’t the hugest fan of.

It’s always nice to read this author’s books – this is a series definitely worth reading if you’re into mystery, suspense and crime.