Review - Spirit of the Wayah by Shea Oliver 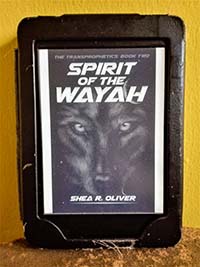 A barbaric, ancient test of manhood leaves a young boy hanging in a tree for dead. Abandoned by his family and unable to remember his past, a prophecy painted in a cave holds the key to his identity. His struggle to discover who he is leads deep within himself and may hold the key to saving us all.

The attack on Earth leaves Dylan and Bjorn fleeing from the invaders as Atticus searches for Maliya, the first Transprophetic identified on Earth.

Tomar Donovackia and Celestina Wiroviana's plans to dominate the galaxy move closer to fruition. The search for the lost portal to the Fourth System finds an unlikely ally, the growing Aechmea Resistance is nearly extinguished, and Tomar discovers the secret to ending all rebellion.

Shea Oliver lives in Niwot, Colorado, near the base of the Rocky Mountains. He can often be found wandering through mountain forests and alpine tundra. An avid hiker and photographer, he often uses his time in the mountains to work through various characters and plots. When he is not enjoying nature, Shea is a devoted father of two teenage sons and a serial entrepreneur.

I at first struggled to get into this book – even though I’d read the previous book in the series a short while ago – this one seemed a tiny little bit higher fantasy than I was used to; but once I got into it – then I really enjoyed the book.

This book didn’t really end on a cliffhanger, and there appeared to be quite a bit of scene setting, though a lot of the characters in this book were quite intriguing. I ended up giving this book a four star rating and got a copy in exchange for an honest review.

This author has definitely got potential, and it’s going to be interesting to see what happens in the next book in the series.