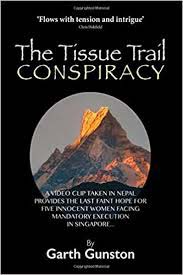 There is only one escape for five female back packers condemned to hang in Singapore - the emergence of an unprecedented and politically EXPLOSIVE explanation which could justify Singapore relenting in a class A drug case for the FIRST TIME in its history.

Their offence had been to carry heroin into Singapore from their Tissue Trail trek on the Nepal Tibet border and had been found guilty despite having no knowledge that they were carrying.

Initially there is no sign of a solution. Then a medical researcher exploring the same Tissue Trail area takes video footage of a salt caravan coming into Nepal from Tibet. This seemingly innocent act leads to his arrest and interrogation not only in Nepal but also Singapore. When he tries to discover why, he starts to uncover evidence that the women may be pawns in just the sort of political conspiracy needed by the defence.

As the researcher and his team get closer to the truth people start to die. But no attempt is made on the researcher himself. In a spell binding climax it becomes clear why.

Garth Gunston is a wild country traveller and now author, never happier than within range of an active volcano, sailing above the Arctic Circle, or helicoptering to the top of the world’s highest waterfalls.

Garth loves to fly around the world’s most dramatic landscapes, preferably as near as possible to live volcanoes. He believes the smaller the plane, the better the view!

Garth’s remote area travelling and experience of PR in the pharmaceutical industry provide the perfect background for his first novel – The Tissue Trail Conspiracy – where five young women backpackers face certain execution for heroin smuggling, until evidence emerges that they are pawns in a global political conspiracy.

Garth attended the same school as D H Lawrence, Nottingham High School before studying pharmacy at Sunderland. After qualifying, he spent ten years in international pharmaceutical marketing before setting up a medical communications agency in London for the American advertising giant BBDO / Omnicom.

In the third stage of his career he became involved in a variety of businesses ranging from patient record computing, to marina and yacht charter in the British Virgin Islands and a variety of commercial property interests in Europe and the Caribbean.

Garth has always been involved with writing, from student newspaper to professional journal articles and healthcare PR.

In his ‘spare’ time, Garth won’t be found sitting down – unless it is to write his next book. From golfing with his wife, Jacky, in Sri Lanka; to riding his beloved steam trains; skiing or pouring over his wine bible to discover the next taste sensation; Garth is a firm believer in living life to the full.

Garth has travelled extensively in the cities, remote regions and mountain ranges, which pepper The Tissue Trail Conspiracy providing scenery as dramatic as the storyline.

This book was quite intriguing – though I had my doubts about it when I first started reading it – but once the book picked up the pace; it was interesting to see how everyone had their place and role in figuring out the puzzle.

I’d be interested to see how this author develops their writing career – a reader can see traces of journalistic and newspaper writing in the writing style.