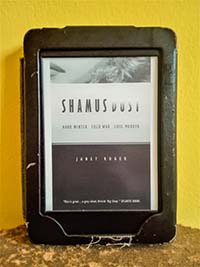 Two candles flaring at a Christmas crib. A nurse who steps inside a church to light them. A gunshot emptied in a man’s head in the creaking stillness before dawn, that the nurse says she didn’t hear. It’s 1947 in the snowbound, war-scarred City of London, where Pandora’s Box just got opened in the ruins, City Police has a vice killing on its hands, and a spooked councilor hires a shamus to help spare his blushes. Like the Buddha says, everything is connected. So it all can be explained. But that’s a little cryptic when you happen to be the shamus, and you’re standing over a corpse.

As a teenager I'd read all of Raymond Chandler's Philip Marlowe stories - not so long after they were written as I'd like to think - and they knocked my socks off. He wrote about Los Angeles and its neon-lit boulevards, its sour, gritty downtown and gun-toting cops (a novelty to this young European) and made them exotic. But what really got under my skin was Marlowe's voice guiding me around the next street corner, and beyond it into a stale apartment block or a down and low bar. He invited me to look over his shoulder, let me see the highs and the lows, talked me through it and then put me in the seat beside him to drive me home. It was heady stuff, up to the point where the story began to seem incidental to the city, its moods and characters and speech patterns. What really mattered was a time, a place and the people you might run into there. I'd discovered a new kind of mystery writing and got hooked. I wasn't the only one. Pretty soon it just wasn't possible to take the Chandler out of anyone's idea of LA. By now you might have the same thought about Leon and Venice, Lehane and Boston, or Block and New York. And when that happens, you know they're getting under your skin too.

This was a really nicely done mystery – steady paced as well as detective like in places as well.

I really enjoyed the descriptions in this book – it was almost literary at times. This book also had quite a sober tone to it – it’s told from the detective’s point of view – Mr. Newman, who can have a bit of a dry sense of humour at times. I liked how the chapters were kept short.

If you’re someone who’s into historical fiction that has mystery and crime that has a bit of a literary writing style to it – this is the sort of book to pick up. I ended up giving this book a four star rating and got an ARC in exchange for an honest review.

I was pretty impressed with this book – and it’s a debut by the author. This is an author whose work I’m definitely going to be reading in the future and keeping an eye out for.