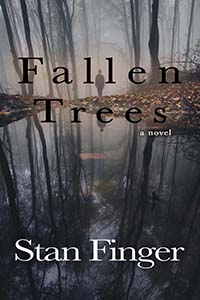 Robbie Richten is at a crossroads both personally and professionally. A promising relationship has faded. His freelance writing career in Kansas City is withering. He returns to his childhood home, a family farm in central Kansas, hoping to sort out his future. While there, he crosses paths with a friend and former classmate who has suffered a devastating loss. They connect anew, prompting Robbie to wonder if something more is possible. But then Robbie’s ex-girlfriend in Kansas City reaches out, seeking another chance. As he struggles to revive his writing career, Robbie finds himself torn between two women. Where will his heart lead him?

Stan Finger grew up on a farm in central Kansas. He developed a love of reading as a young child - likely picked up from his mother - and after devouring mystery series such as Encyclopedia Brown, Nancy Drew, the Hardy Boys and Trixie Belden, he decided to try his hand at writing books as well, even though he was not yet in his teens.

That fascination with writing never left him. He became a journalist, eventually landing a job with the Wichita Eagle, the largest newspaper in Kansas. It combined his love of writing and interest in current events. Over the course of his career at the Eagle, Finger has received many awards and has twice been nominated for the Pulitzer Prize.

But his desire to write novels never waned. After seeing that a grove of trees that helped identify a location in central Kansas for decades had been cut down, he began writing a book that would eventually become "Fallen Trees." When Robert Rogers contacted him and asked for assistance writing a book about the flash flood on the Kansas Turnpike in 2003 that claimed the lives of his family, Finger agreed. "Into the Deep" was published in 2007.

Now, nearly a decade later, "Fallen Trees" is making its debut. People who have read it prior to publication are already asking when the sequel is coming out. Finger is at work on more writing projects, though a sequel is not yet one of them.

He makes his home in Wichita.

In my opinion – this was a lovely book to read. I’d classify it as a cozy contemporary – since that is what it felt like; but maybe it was also just the mood I was in, the book also seemed to be a bit of a mood for me. I could have spent all day reading this one. At some spots – it reminded me a little bit of 11.22.63 by Stephen King; it had that sort of vibe for me.

I liked the town’s descriptions as well as the atmosphere – and it’s something that I don’t see a lot in books; and wish that I saw more of. If you’re someone who’s into contemporary – definitely put this book on your TBR list.

This is definitely an author that I’m keeping my eye on – it’s the first book that I’ve read of his; and I’m really hoping that he’ll keep up his writing career.