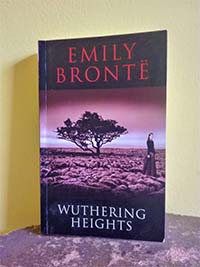 Wuthering Heights tells the story of a romance between two youngsters: Catherine Earnshaw and an orphan boy, Heathcliff. After she rejects him for a boy from a better background he develops a lust for revenge that takes over his life. In attempting to win her back and destroy those he blames for his loss Heathcliff creates a living hell for those who live at Wuthering Heights. This tale of hauntings, passion and greed remains unsurpassed in its depiction of the dark side of love.

Emily Jane Brontë was an English novelist and poet who is best known for her only novel, Wuthering Heights, now considered a classic of English literature. Emily was the third eldest of the four surviving Brontë siblings, between the youngest Anne and her brother Branwell. She wrote under the pen name Ellis Bell.

For those who aren’t into books that have got dark atmospheres – rather give this one a skip. This is a book that has a dark atmosphere and themes. Even though this book wasn’t quite to my taste, though written well – I’m glad I read it. I ended up giving this leisure read a two star rating.

Even though I have been wanting to read a classic for a while, this wasn’t quite what I was wanting to go for. I will be reading another Bronte book at some stage.